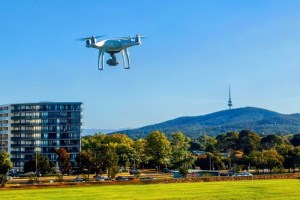 The drones will deliver small items including food and drinks and over-the-counter chemist items to about 100 homes in Canberra’s north.

Wing Aviation, a company under the Alphabet umbrella, has been trialling drone deliveries in the area for the past 12 months.

This week, the Civil Aviation Safety Authority gave the company the green light to go ahead full time.

About 1,000 deliveries were made during the trial period without incident, allowing regulators to judge the project was safe.

It is the first commercial approval in Australia and one of the first anywhere in the world.

Winged drones will only be allowed to fly 11 to 12 hours a day and they must be piloted, rather than fully automated.

Five suburbs will initially receive the service with drones delivering goods from a dozen local businesses.

The initial area of operations (about 100 homes) is expected to expand quickly.

The regulator did not look at the noise or privacy impact of the project – two issues that emerged during trials.

Some residents complained about the noise of the drones.

And though they were below legal noise limits, Wing has since developed a new, quieter, model for its new operation.

A customer uses an app to order the product, which is loaded onto a drone.

The drone hovers above its destination, lowering the goods down on a winch-like cable before flying away.

In the United States UPS last month launched that country's first authorised use of unmanned drones to transport packages to recipients.