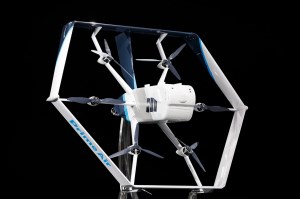 Amazon is about to launch a new drone that can fly nearly 25km and deliver packages to customers in less than 30 minutes.

And the e-commerce giant expects to begin delivering packages via drone to its customers “within months”.

“Our newest drone design includes advances in efficiency, stability and, most importantly, in safety,” said Wilke. “It is also unique, and it advances the state of the art.

The new drone is a hybrid design that can do vertical takeoffs and landings – like a helicopter. And it’s efficient and aerodynamic – like an airplane. It easily transitions between the two modes – from vertical-mode to airplane mode, and back to vertical mode.

The drone is fully shrouded for safety. The shrouds are also the wings, which makes it efficient in flight.

The distinctive aircraft is controlled with six degrees of freedom, as opposed to the standard four. This makes it more stable, and capable of operating safely in more gusty wind conditions.

“When we announced earlier this year that we were evolving our Prime two-day shipping offer in the US to a one-day program, the response was terrific,” said Wilke.

“But we know customers are always looking for something better, more convenient, and there may be times when one-day delivery may not be the right choice.

“Can we deliver packages to customers even faster?

“We think the answer is yes, and one way we’re pursuing that goal is by pioneering autonomous drone technology.”

Wilke says customers will only feel comfortable receiving drone deliveries if they know the system is incredibly safe.

“Some drones are autonomous but not able to react to the unexpected, relying simply on communications systems for situational awareness.

“If our drone’s flight environment changes, or the drone‘s mission commands it to come into contact with an object that wasn’t there previously – it will refuse to do so – it is independently safe.”