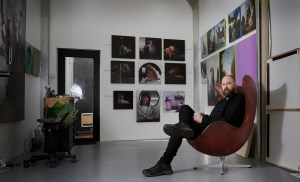 In his latest body of work, Melbourne-based artist Sam Leach follows in the footsteps of painters throughout history who have adopted ground-breaking new technologies to create an impact with their audience.

Inspired by recent research undertaken by a leading neuroscientist at the Queensland Brain Institute, Leach embarked on the new project.

His aim was to train a machine to automate the cognitive labour of deciding what he should paint, thus freeing himself to focus on the manual process of painting.

Working with a coder he developed an Artificial Intelligence armed with an algorithm capable of inventing images.

Originally the AI was trained exclusively on his own paintings. Then the dataset was expanded to include a range of historical imagery from art, architecture and the sciences.

Over hundreds of thousands of repeated passes the algorithm, working in two opposing parts, generated and discriminated until “an electro-pixel fog of strange, uncertain visions” were realised, sufficient to inform and inspire Leach’s bold series of paintings.

The resulting body of work, Fully Automatic, will be unveiled at Sullivan+Strumf gallery in Sydney on August 20.

The collection represents a unique collaboration between AI and artist, with Leach bringing the refinement, certainty and solidity required for each final image.

In the artist’s case, the experiment has thus far led to the discovery of “unexpected parallels in aesthetics and composition suggesting connections that I would be unlikely to find without computer assistance”.

Leach says the technique may eventually lead to the identification of some new approaches to iconography.

They offer a glimpse into the broader timeline of humanity’s ideation and development, he says.

The paintings draw on more than five centuries of references, reminding us of the influence of ongoing iterations of progressive thinkers, Leach says. Each work provides a glimpse into the potential of a technology-driven future.

The work stems from research which Leach studied with Emeritus Professor Srini Srinivasan of the Queensland Brain Institute in Brisbane. Dr Srinivasan is a neuroscientist specialising in how bees and birds visually negotiate the world and applications for biomimetic robots.

“Some of his projects were prototype drones which used very simple rules to navigate the world,” Leach explains.

Putting two neural networks up against each other

“I was very interested in this non-human way of seeing the world and undertook further research on computer vision, leading me to this type of image generating algorithm.

“I worked with a professional coder to develop an algorithm based on a generative adversarial network or GAN which essentially puts two neural networks (AI learning models based on the architecture of the human brain) up against each other.

“Both parts of the algorithm compete with each other through thousands of repeated cycles, both improving as they learn how to generate and discriminate more effectively.”

In 2010, Leach won both Wynne and Archibald Prizes at the Art Gallery of NSW. He was a finalist for the Royal Bank of Scotland Emerging Artist Award in 2009. His work has been extensively exhibited nationally and internationally.

Sam Leach, Fully Automatic can be seen at Sullivan+Strumpf in Sydney until September 12. View online at https://www.sullivanstrumpf.com/