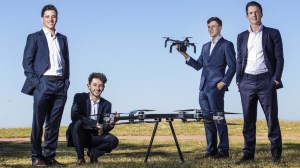 Manufacturing in Australia has had a bad rap in recent times, but it’s far from a fading industry, a new report finds.

The report Welcome to The Future of Manufacturing, commissioned by St George Bank, says new technologies are bringing a new generation into the manufacturing sector.

Science and technology are changing what it means to be a manufacturer today.

They are also driving the exciting re-emergence of manufacturing in countries like Australia, says Matthew Kelly, Head of Manufacturing and Wholesale at St George.

“It’s a hive of innovation. I see this in the high-tech facilities that I visit, and I hear it from the smart manufacturers who are harnessing new technologies to move their business forward.”

The manufacturing industry is undergoing rapid transformation as the fourth industrial revolution sweeps across the globe.

A significant number of Australian companies have already embraced the evolution. And they are blazing an impressive trail for others to follow, says Kelly.

And it’s not only emerging players making waves in advanced manufacturing, Kelly points out.

Some well-established companies are reinventing themselves through investment in automation, advanced data analytics and artificial intelligence.

Many good news stories are overlooked

Australia has advanced manufacturers across the spectrum – from textiles to biomedicine, construction and aerospace.

NSW manufacturers produce almost 30 per cent of Australia’s total manufacturing output and generate about A$33 billion in industry value.

They also directly employ around 253,000 people, which represents almost a third of jobs in the manufacturing sector in Australia.

The much-publicised closure of the automotive sector has resulted in many good news stories being overlooked, says Kelly.

Off to a flying start

It got off to a flying start by securing its first contract in 2018 to build the Australian Defence Force’s next generation of reconnaissance drones. From humble beginnings in a backyard garage, it is now a 20-person team based in Sydney’s Caringbah.

“Our ambition was to influence the aerospace industry in Australia,” says Chief Operating Officer Sam Lewinson. “We started off with around fifty grand in the bank from our combined savings and used that to start prototyping a large drone to carry around 20-30kg.”

The company’s subsidiary business, JAR Education, aims to close what Lewinson describes as “a big gap between industry and education” by showing school students how to build drones.

“For our education business, we deliver around 300-400 drones a year,” says Lewinson.

“We’re still in the R&D stage for our defence contract, so we haven’t gone into manufacturing our designs yet, but we’ve developed around five concepts.”

The development of composite materials and greater automation are driving advances across the manufacturing industry, he says.

But Australia’s high minimum wage makes it hard to compete with lower-wage countries, Lewinson explains. “It requires a strategy of using the most innovative technology so that you can compete on a global scale ... If you don’t push things right to the edge, you don’t really know what you can achieve.

“As an eight-month-old company, we won our first defence contract. I’m not going to say that it was all ice creams and rainbows along the way.

“Every small business will tell you that cash flow is one of the hardest things to manage. But we’re starting to lockdown contracts and are on track to secure an education deal that will see 7,500 drones delivered to air force cadets. It’s a really exciting prospect when you can start forecasting more than three to six months ahead.”

STEM skills are vital to Australia’s future economic competitiveness, yet the country’s STEM teaching and learning results are in decline.

“Everybody wants really good employees that come out of school with industry skills,” Lewinson says. “But there are so few programs for students to complete that are engaging and that use technology that is current.

“We want to get students excited about the possibility of what’s out there in the technology industry. You never know, some of them may end up working with us one day.”

Annual contribution to Australian GDP by the industry

Number of jobs supported by the industry, both in workforce and purchased inputs