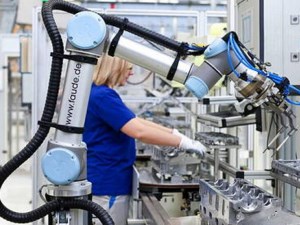 The world will see a dramatic increase in the population of robots by 1.4 million by 2019, according to a recent report by the IFR, the International Federation of Robots.

This will include self-driving cars, automated assembly lines and unmanned aerial vehicles.

Robotic assistance will be seen in industries across the globe, creating new industrial solutions.

And while many roboticists see robots replacing thousands of factory workers, it doesn’t mean that labour will be lost for them – it will just mean their role will change.

Robots will be used more widely to tackle the tedious, repetitive work that’s difficult for humans. Robots will be expected to learn new tasks and then execute them.

Instead of hiring people to work on mundane, repetitive tasks, they will be required to teach these tasks to robots so humans can focus on more creative problems.

Positive for workers and consumers

This benefit will allow workers to work side by side with robots as opposed to being replaced by them. This is seen as a positive for both workers and consumers.

In Germany’s automotive market, the link between a rise in automation and a rise in employment has been established. This automation has also helped reduce production cost.

If robots can see more and communicate with both humans and other robots, more cost-effective work can be done.

Given the benefits that will flow to employers and consumers, the prediction of 1.4 million robots in the world in the next two years seems conservative.