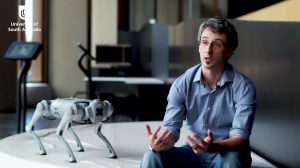 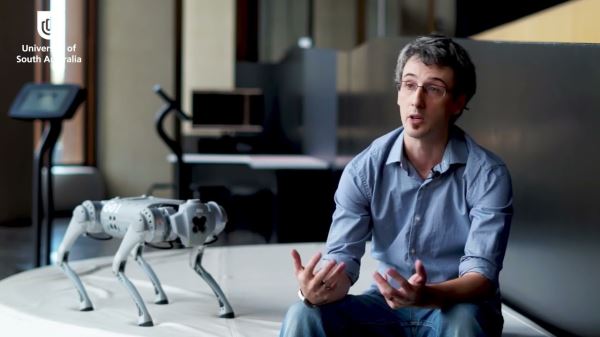 The UniSA STEM academic unit has added a new member to its team.

Weighing just 13 kg, with a price tag of $25,000, and equipped with 13 motors and multiple on-body cameras, Clive is based at the Australian Research Centre for Interactive and Virtual Environments (IVE), at Mawson Lakes in the northern suburbs of Adelaide.

His mentor, Dr James Walsh, an Enterprise Fellow at UniSA STEM, says the autonomous robot is the first university-owned quadruped in South Australia and will help advance research in multiple areas.

“Quadrupeds like Clive are now commonly used for remote inspections by defence, space, mining and utility companies, and for search and rescue, but we are interested in taking his capabilities much further,” Dr Walsh says.

“He’s going to prove invaluable in our augmented and virtual reality research at IVE, helping us to see how Clive perceives the world and how we can leverage that for everyday scenarios.

“People have different reactions to quadrupeds like Clive. Some people find him confronting as they don’t know how he sees or perceives them, given that he can act autonomously.

Quadrupeds could become commonplace at airports

“We want to find a way for Clive to be able to communicate with those around him, so he becomes less of a black box and more of a two-way communication between human and robot.”

Dr Walsh says it’s possible that quadrupeds could become commonplace at airports, where strict licensing and regulations restrict the use of aerial drones.

“We can install the same cameras and sensing equipment in quadrupeds that we do in aerial drones. Clive could do inspections at Adelaide Airport, for example, without the risk of being sucked into a jet engine.”

The multiple cameras fixed around his body ensure that Clive has an almost 360° view of his environment, allowing him to recognise objects and people, and eventually understand human gestures.

“Technology like this is the ultimate demonstration of STEM in action. It brings together electrical and mechanical engineering, maths and computer science and shows us what is possible when we merge all these different skills,” Dr Walsh says.