Focus on robotics at Food Pro 2017 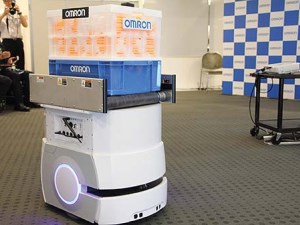 Robots are being increasingly used to improve efficiency and productivity in manufacturing processes.

While many people are familiar with fixed mounted robots, there have also been significant advances in mobile robot technology recently.

At Foodpro 2017 in Sydney this week, Omron’s Automation Technology Product Manager Chris Probst will explain how mobile robots can boost productivity in the food and beverage sector.

Mr Probst is one of several expert speakers at foodpro’s free seminar series, covering the latest industry trends such as traceability, food safety and hygiene.

He will explain how technology has advanced mobile robots and improved food processing.

At Omron’s display stand, Mr Probst will also treat visitors to a live demonstration of Omron’s new LD Series mobile robot and showcase its many capabilities.

“Mobile robots are able to carry loads between locations, and can do so 24/7 without rests or breaks,” says Mr Probst.

“As the loads they convey can be hazardous, heavy or in hard-to-reach places, it’s highly desirable to automate this common but mundane and sometimes dangerous task.”

Mr Probst says AGVs (Automated Guided Vehicles) have been the most common mobile robot. AGVs have fixed travel paths set out by tapes or other floor mounted markers.

“While they work well, AGVs are inherently inflexible due to their fixed, predefined path,” says Mr Probst.

“However, Autonomous Intelligent Vehicles (AIVs) are a far more flexible transport system. As their name suggests, AIVs are autonomous and are therefore able to chart routes for themselves. They do his by storing a digital floor map they have previously determined. They do not use fixed sensors or markers along their route.

“Using a standard wifi connection, monitoring systems can plot locations, and when multiple AIVs are used, a central fleet management system can forward plan routes to ensure loads from various locations are transferred as efficiently as possible.

“The environment AIVs work in is often highly dynamic, with temporary obstacles commonplace. AIVs carry localisation sensors to detect these obstacles and are then smart enough to dynamically plan an alternative course for themselves to circumvent obstructions.”

Mr Probst says another big advantage is that AIVs are made with human collaboration in mind.

“Their sensors can detect moving objects, and can even playback voice synthesized messages to alert humans. They are a true “co-bot".

The LD Series mobile robot is designed for dynamically moving material in challenging environments – including confined passageways and workplaces with staff on the move.

Also at foodpro 2017, Scott Automation and Robotics will unveil its new Automated Robotic Beef Rib Cutting system, the first of its kind.

The new system eliminates all key risks to employee Workplace Health & Safety and is capable of operating at line speeds of 520 sides per hour.

Beef Rib Cutting is the first point at which yield can be lost during the boning process and also poses a large risk of personal injuries or amputations to operators.

The Automated Robotic Beef Rib Cutting system uses a combination 3D scanners, x-ray and colour cameras. The 3-D scanner is used to scan the carcase and assist in cut placement and transforms the vision processing results for the robot to perform the cut. A colour camera is also used to identify a point of interest on the carcase to help determine the correct cut location.

Finally, a circular saw is mounted to the end of a robot to enable the cuts to be performed on the carcase.

Beef rib cutting is a typical case where current manual tasks can be replicated by an automated system. The major benefits of this automation are increased yield and the positive impact on critical industry OH&S issues.

And Universal Robots will have on display its complete range of collaborative robot arms, which have revolutionised the market for industrial robots.

The robot arms are tools that are collaborative and safe, working alongside human workers.

With an average payback period of 12 months, Universal Robots can help to increase companies’ competitiveness by automating processes and raising productivity.

The collaborative robots free employees from tedious and monotonous tasks, allowing effective manpower reallocation to other processes where required.

The exhibition is now on at the Sydney International Convention Centre Darling Harbour.