Are Australian students ready for the robot revolution? 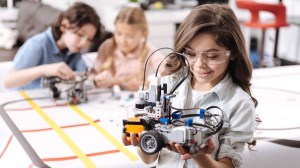 Robotics is growing in popularity all around the world, and not just in logistics and manufacturing.

Robotics and artificial intelligence are now ubiquitous in all areas of our daily lives. Many use Amazon’s Alexa, have robotic pool cleaners and robotic vacuum cleaners in their homes.

But how many Australians have the skills needed to develop and maintain such technology?

The report How Robots Change the World by Oxford Economics found that robots could replace 20 million jobs by 2030, displacing 8.5 per cent of the global workforce. According to the report, the current global work force of robots is 2.25 million. This double the number it was in 2010 and has multiplied threefold over the past 20 years.

The United Kingdom is said to be the most at risk due to its concentrated manufacturing industries and the European Union is set to lose nearly two million jobs to robots.

However, it is not all doom and gloom. Along with an increase in robots come opportunities for jobs in robotics. According to AlphaBeta’s report for Google Australia, automation could boost Australia’s productivity and national income, adding up to $2.2 trillion to the economy by 2030.

However, with this shift, comes a need for students who are interested in robotics and will go on to design, programme, and maintain the technology in years to come. In order to have such a workforce, children need to be aware of potential gateways into such professions.

Now is the time to start teaching robotics in schools. The growth of robotics is a clear indicator for a gap in talent and a need for specific skills in coding and robotics. Providing children with the access to this knowledge and allowing them to develop such skills will enable them to remain competitive in the changing workforce.

Last year, the Australian Centre for Robotic Vision partnered with industry, researchers and government agencies to develop a Robotics Roadmap for Australia. The Robotics Roadmap acknowledges that “while the long-term benefits of transitioning to an Industry 4.0 robot-ready economy are clear - economic growth, wealth creation, job upskilling, diverse job opportunities - short-term dislocation will impact occupations across all industries. A robot-ready economy must also find ways to retrain and upskill our workforce and disrupted occupations.”

The Australian Centre for Robotic Vision understands that “combined with the right investment, this ecosystem can build, and feed, an innovation pipeline that will realise new robotic vision products, services and businesses and the skills needed to service them.”

Australia is well on its way to creating an education system that supports the digital shift that comes with the growth of industry 4.0.

In 2016, the Queensland government made it compulsory for all students from Prep to Year 10 to study robotics and coding in school. The National syllabus now states that students must have exposure to simple, programmable devices like robots by their third year of primary school. And by secondary school, students must be able to demonstrate an aptitude for programming by coding robots to both recognise different objects and respond to them appropriately.

Educational robotics equipment from companies such as Edison, Osmo and PRISMO are already being utilised as part of STEM subjects in schools. In Victoria, Australia, it is also compulsory to study robotics in schools. Ashwood School in Victoria has implemented a digital pet named Cozmo to help students learn about some key concepts of the Digital Technologies curriculum.

And at Melbourne Girls Grammar, students in years nine to twelve have the opportunity to complete their Remote Pilot Licence (RePL) – a qualification certified by the Civil Aviation Safety Authority to fly drones for commercial purposes.

For schools that do not teach robotics in their curriculum yet, companies like Robokids run robotics workshops to provide children with innovation and technological skills needed for later in life.

Robokids has taught robotics across to over 55,000 Australian students in schools and children’s services.