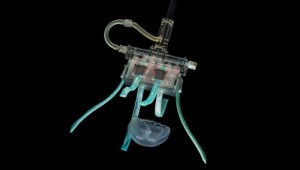 Jellyfish are 95 percent water. They are one of the most delicate living organisms that can be held in a person's hands.

Interestingly, the tissue that makes up the 5 percent that isn't water has actually yielded impressive scientific discoveries, like green fluorescent protein (GFP), a finding that could help combat aging.

The problem is that jellyfish are so delicate, it is difficult for remote robotic arms to collect them without causing damage. Now, researchers have found a solution in the form of soft robotics.

The tools aboard remotely operated vehicles (ROVs), used for picking up samples, that are available to marine biologists were largely developed for the marine oil and gas industries.

As such, they are best suited for grasping and manipulating rocks and heavy equipment.

Unfortunately, these types of tools often shred jellyfish to pieces in attempts to capture them.

Now, a new technology developed by researchers at Harvard's Wyss Institute for Biologically Inspired Engineering, and Baruch College at CUNY, offers a way of collecting jellyfish with an ultra-soft robotic hand-like gripper. This gripper is able to hold a jellyfish without causing it harm.

The new soft robotics technology, which pumps water into soft finger-like tubes to allow a gentle grip, is described in a new paper published in Science Robotics.

“Our ultra-gentle gripper is a clear improvement over existing deep-sea sampling devices for jellies and other soft-bodied creatures that are otherwise nearly impossible to collect intact," first author Nina Sinatra, a mechanical and materials engineer at Google, said in a media release.

"This technology can also be extended to improve underwater analysis techniques and allow extensive study of the ecological and genetic features of marine organisms without taking them out of the water."

The gripper's six "fingers" are made from thin, flat strips of silicone with a hollow channel inside, bonded to a layer of flexible but stiff polymer nanofibers.

The fingers are attached to a rectangular, 3D-printed plastic "palm." When the channels fill with water, they curl in the direction of the nanofiber-coated side.

The fingers each exert an extremely low amount of pressure – about 0.0455 kPA, which is less than one-tenth of the pressure of a human's eyelid on their eye.

To give a bit of perspective on this, the current best soft marine grippers - which are used to capture delicate marine life, though a little stronger than jellyfish – exert about one kPA.

A later phase of the researchers' study saw them test their gripper by collecting real jellyfish at the New England Aquarium. They collected swimming moon jellies, jelly blubbers, and spotted jellies – all of these are roughly the size of a golf ball.

No signs of stress

The jellyfish showed no signs of stress or other adverse effects after being released, and the fingers were able to open and close roughly 100 times before showing signs of wear and tear.

“Marine biologists have been waiting a long time for a tool that replicates the gentleness of human hands in interacting with delicate animals like jellyfish from inaccessible environments,” said co-author David Gruber, a professor of biology and environmental science at Baruch College and a National Geographic Explorer.

“This gripper is part of an ever-growing soft robotic toolbox that promises to make underwater species collection easier and safer, which would greatly improve the pace and quality of research on animals that have been under-studied for hundreds of years, giving us a more complete picture of the complex ecosystems that make up our oceans.”

The ultra-soft gripper is the latest innovation in soft robotics for underwater sampling.

An ongoing collaboration between Gruber and Wood has produced the origami-inspired RAD sampler and multifunctional “squishy fingers” to collect a diverse array of hard-to-capture organisms, including squids, octopuses, sponges, sea whips, corals, and more.

The team is continuing to refine the ultra-soft gripper’s design.

It is aiming to conduct more studies that evaluate the jellyfishes’ physiological response to being held by the gripper, to more definitively prove that it does not cause the animals stress.