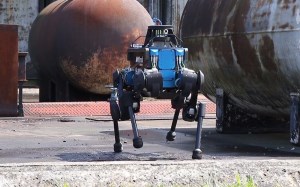 They are surrounded by stormy seas for weeks at a time and often located hundreds of kilometres offshore.

Now scientists are testing a four-legged autonomous robot that could replace the need for humans on remote oil rigs and potentially save oil companies millions of dollars in costs.

The researchers from Oxford and Edinburgh universities are trialling Anymal, a 30kg metal robot that moves like a dog, to carry out visual inspections of offshore oil rigs.

Oil and gas platforms, which endure extreme conditions including high pressures and constant exposure to salt water and storms, must be constantly monitored and inspected to ensure safe operation. These inspections, when conducted by humans, are often dangerous and require additional manpower.

But robots could continuously monitor rigs 24/7 and alert maintenance teams if needed.

Unlike some of the previous robots tested by the industry, Anymal is able to overcome small obstacles and is waterproof.

The machine, made by Zurich technology startup Anybotics, has a battery that lasts two hours but is able to recharge itself.

Maurice Fallon, head of the dynamic robot systems group at Oxford University, said that the team is testing the robot at the Fire Service College in Gloucestershire, where a replica rig has been built for research on tackling complex oil fires.

"On top of the robot we have a sensor, and that could be used to 3D map the environment, and then you can tell it to point the camera at a location and make a mission," he said.

Rebecca Allison, a manager at the OGTC said robots could make the industry more "productive, mobile and connected".

"We need to accelerate the development of robotics in the oil and gas industry so that in 10 years or so they will be seen as common place," she said.

"Future generations will grow up with robots and will think nothing of working alongside them or even learning from them. Investment and vision are needed to realise this."

This project is funded as part of a government-funded project called the Offshore Robotics for Certification of Assets Hub.

If the trials are successful, the robots could reduce the need for humans to be stationed in remote and uncomfortable locations.

At the same time, it would save oil and gas companies millions of dollars in wages for workers living and working in extreme conditions.