Sydney rocketry team on top of the world 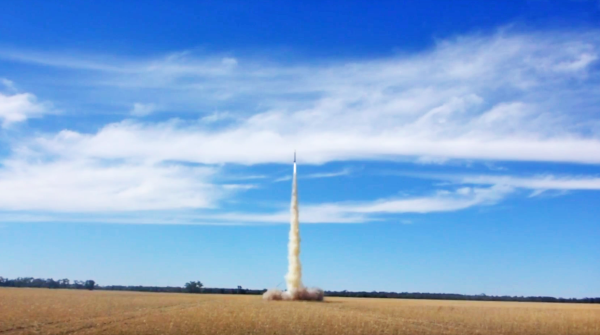 The team was the first Australian team to attend and compete in the university rocketry competition held annually in New Mexico, US.

Competing against 51 student teams from around the globe, including Princeton and ETH Zurich, the University of Sydney team claimed victory with its custom-built rocket, Silvereye, in the 10,000 feet commercial off-the-shelf category.

“Our win represents the biggest achievement for university student rocketry in Australia’s history. We are proud to have represented our country well and look forward to collaborating with other universities for next year’s competition.”

The University of Sydney team was commended for its precision and safety preparedness, with the rocket reaching a height just 27 feet above the target altitude of 10,000 feet – about 3km. The team also received an honourable mention for their sportsmanship, using their expertise to assist other teams launch and recover their rockets.

“It has been an absolute honour leading a team of dedicated and talented students in New Mexico to launch Silvereye. Our rocket has been successfully flown and recovered both in Australia and now in the US, highlighting the robustness and adaptiveness of our design,” said the team’s chief engineer, Mitchell Galletly.

Competing against a global cohort of universities and working alongside leading aerospace organisations has allowed the team to gain new insights into the international space industry that they hope to share with their peers.

University of Sydney Vice-Chancellor and Principal Dr Michael Spence congratulated the students on the result.

"It is wonderful to see their hard work pay off on a global stage. Their success in New Mexico not only demonstrates the high calibre of our students, but also showcases our commitment to world-class research in aerospace engineering,” Dr Spence said.

Silvereye was built from a custom-designed and manufactured carbon fibre airframe. It uses  a solid propellant to achieve speeds approaching the speed of sound.

In 2020, the team hopes to compete again while also paving the way for other universities to join them.

– a dynamic group of student aerospace engineers who design and manufacture high-powered rockets.

Last year, the team became the first Australian university team to design and build a rocket that successfully reached 10,000 feet.

The team's trip to New Mexico was supported by 33 donors, who raised over $3,000 through a crowdfunding campaign.