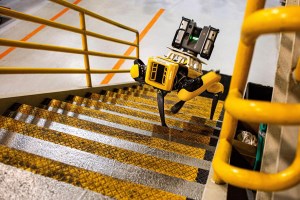 Automotive giant Ford is putting somecutting-edge autonomy into one of its US factories with the deployment of two agile “robotic pups.”

In a new pilot program, the car-maker is leasing two robotic dogs, known as Spot, from Boston Dynamics for its Van Dyke Transmission Plant in Michigan.

Initially, the dogs will be guided by handler Paula Wiebelhaus, who uses a controller and will personally monitor the bots in operation.

Painted bright yellow, the quadruped robots will each carry five cameras with two hours’ of battery power. They will patrol the floor capturing plant data and dimensions that will eventually be used to retool the line.

Eventually, the robots may be used to perform the task autonomously.

"We design and build the plant. After that, over the years, changes are made that rarely get documented," says Mark Goderis, Ford's digital engineering manager.

"By having the robots scan our facility, we can see what it actually looks like now and build a new engineering model. That digital model is then used when we need to retool the plant for new products."

According to Ford, the Spot deployments could save the company $300,000 per year, which is the cost of manually scanning the giant facility.

"We used to use a tripod, and we would walk around the facility stopping at different locations, each time standing around for five minutes waiting for the laser to scan," Goderis recalls. "Scanning one plant could take two weeks.”

With the new technology Ford can now complete the task in half the time.

In line with larger sector trends, Boston Dynamics designed Spot to be application agnostic, outfitting it with baseline capabilities to perform multiple duties.

Also, to conserve Spot’s batteries, it will at times be transported on a mobile robot to complete its tasks.

That small courier robot, known informally as Scouter, will ferry the dog robots up and down the aisles as it scans the area.

Scanning physical spaces is a job well-suited to robots.

Like Spot, DogBot is a mobile sensor platform that can autonomously navigate spaces utilising machine learning algorithms for locomotion, perception, and proprioception.

And a construction firm in Canada used a Spot robot to automate and capture thousands of images weekly on a 152,000 sqm building site.

By creating an ongoing record of progress builders could identify growing problems and inefficiencies early.