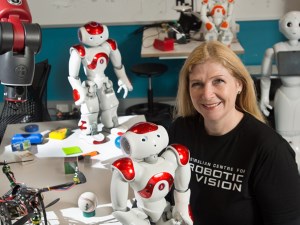 Robotics and automation is now driving economic growth and improving quality of life across the globe.

Robotics and automation is also at the centre of advanced technologies such as camera systems, communication systems, displays and basic computing.

Robots are taking over the repetitious, tedious tasks that humans find boring, dirty and dangerous.

They are also being used to perform advanced medical procedures and delicate surgeries and to assist staff and patients in aged care. And social and service robots can now be found in offices, hospitality venues and homes throughout Australia.

Technology is transforming our lives at a rapid pace, so it is vital for us to plan for the changes that technology brings.

When it comes to innovation, governments must formulate policies to keep Australia at the forefront of new technology – and to lead the way in robotics and research.

To do this effectively, governments need accurate data on the robotics industry in Australia and its value to the Australian economy.

A group of Australian researchers is now working to develop a robotics roadmap which will guide Australia into the future.

The research is being led by Dr Sue Keay, the chief operating officer at the Australian Centre for Robotic Vision, and her team. Dr Keay has the backing of the Queensland University of Technology and Advance Queensland.

Earlier this month, the Centre called for submissions from other Australian research centres and institutions involved in robotics and computer vision to assist in developing the comprehensive roadmap.

Submissions are also being sought from various industry sectors – including resources, built and natural environment, manufacturing, services and healthcare.

And a series of workshops are scheduled for later this year.

The roadmap will be modelled along similar lines to robotics initiatives in the US and Europe published in recent years.

Europe has released a number of roadmaps in recent years including its latest – Robotic Visions to 2020 and Beyond.

The US last year published its third Roadmap for US Robotics, with the help of 19 leading US universities and research institutions. The document was used to update US Congress on the robotics industry in US.

The first version was released in 2009, and resulted in a $70 million research funding boost from the Obama administration through its National Robotics Initiative.

Dr Henrik Christensen, Director of Contextual Robotics at the University of California, who led each of the US roadmaps, is advising the Australian Centre for Robotic Vision.

Dr Keay says the Australian version will give Government an accurate picture of the robotics industry in Australia and it’s worth to the economy.

It will also focus on the social implications for some of the technological changes that are predicted in the future.

“We hope the roadmap will inform policy, guide future research directions and support the development of the robotic and vision technologies required to support Australian industry in the future,” Dr Keay says.

Importance of robotics and automation technologies

“The one thing that has been holding us back is we don’t have a very good understanding of what the robotics industry looks like in Australia,” says Dr Keay.

“Nor do we have a good idea of which industry these technologies have the most impact on.

“So over the next 10 months I’m hoping to really attack that.”

“What makes our centre unique is the number of leading researchers specialising in this technology,” she says.

“While there are other robotics vision experts across the globe, there is not a whole group of people with this level of expertise – so yes, we are leading the world.”

Dr Keay says unless Government is provided with accurate data on what the robotics industry generates it is difficult to put a case forward for funding.

“We don’t really have that answer at the moment.”

The Centre is aiming to release the Australian roadmap at the International Conference for Robotics and Automation (ICRA) in May next year.

To be held in Brisbane, it will be the first time ICRA has been hosted in the southern hemisphere.

“This is Australia’s opportunity on the world stage – it is our chance to say ‘this is where we are heading in robotics and take some leadership in that space,” Dr Keay said.

For more information or to enquire about lodging a submission contact the Australian Centre for Robotic Vision Ph: 07 3138 7549 www.roboticvision.org