Social robots: Just what the doctor should order to improve mental health 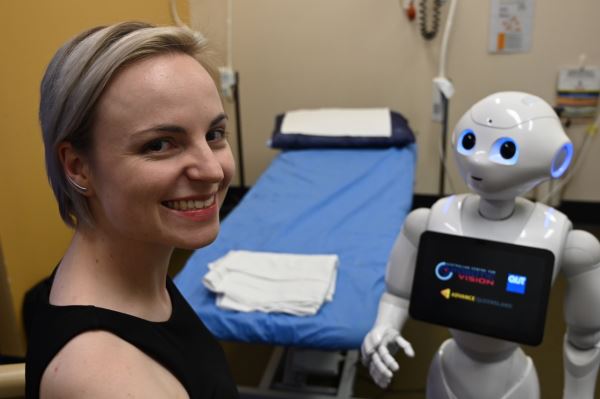 Social robots could play a vital role in the treatment of people with mental health issues and substance use disorders, says a leading Australian roboticist.

According to 2017 figures such health issues affect 970 million people globally.

So the time is ripe for meaningful social robot “interventions,” says Nicole Robinson – a roboticist with expertise in psychology and health.

They indicate a “therapeutic alliance” between robots and humans could lead to positive effects similar to the use of digital interventions for managing anxiety, depression and alcohol use.

“The beauty of social robot interventions is that they could help to side-step potential negative effects of face-to-face therapy with a human health practitioner such as perceived judgement or stigma,” said Dr Robinson who has used Nao and SoftBank’s Pepper robots in her research at the Centre.

“Robots can help support a self-guided program or health service by interacting with people to help keep them on track with their health goals.

“Our research is not about replacing healthcare professionals, but identifying treatment gaps where social robots can effectively assist by engaging patients to discuss sensitive topics and identify problems that may require the attention of a health practitioner.”

Helping to lay the groundwork

In a paper in the Journal of Medical Internet Research (JMIR), published last month, Dr Robinson puts out a timely global call for research on social robot interventions to transition from exploratory investigations to large-scale controlled trials with sophisticated methodology.

At the Australian Centre for Robotic Vision’s QUT headquarters, she’s helping to lay the groundwork.

The Centre’s research, sponsored by the Queensland Government, is assessing the capabilities of social robots and using SoftBank’s Pepper robot to explore applications where social robots can deliver value beyond their novelty appeal.

In 2018, the Centre’s social robotics team initiated a set of trials involving Pepper robots to measure the unique value of social robots in one-to-one interactions in healthcare.

After supporting an Australia-first trial of a Pepper robot at Townsville Hospital and Health Service, the Centre’s team has placed Pepper into a QUT Health Clinic at Kelvin Grove Campus.

The three-month study, scheduled to end this month, involves Pepper delivering a brief health assessment and providing customised feedback that can be taken to a health practitioner to discuss issues around physical activity, dietary intake, alcohol use and smoking.

Members of the public who are registered as patients at the QUT Health Clinic are invited to take part in this trial.

In a separate online trial, also seeking public participation, the Centre’s social robotics team is assessing people’s attitudes to social robots and their willingness to engage with and discuss different topics with a robot or human as the conversation partner.

It takes the form of a 10-minute survey>>

Now is the time to focus on mental health issues

She and the Centre’s social robotics team believes it’s now time to focus on weightier health and wellbeing issues, including depression, drug and alcohol abuse, and eating disorders.

Global trials to date are “very few and unsophisticated,” she says.

Many of them lacked a follow-up period and targeted small sample groups (fewer than 100 participants).

Also, there was only limited research to contexts of child health, autism spectrum disorder (ASD) and older adults.

Of concern, no randomised controlled trials have yet involved adolescents or young adults, Dr Robinson says.

Most cases are undetected and untreated

This is at a time when the World Health Organisation (WHO) estimates one in six adolescents (aged 10-19) are affected by mental health disorders.

According to the agency, half of all mental health conditions start by 14 years of age but most cases are undetected and untreated.

WHO warns: “The consequences of not addressing adolescent mental health conditions extend to adulthood, impairing both physical and mental health and limiting opportunities to lead fulfilling lives…”

In good news for the Centre’s research into social robot interventions, WHO pushes for the adoption of multi-level and varied prevention and promotion programs including via digital platforms.