Aussie team to get down and dirty in underground robotics challenge 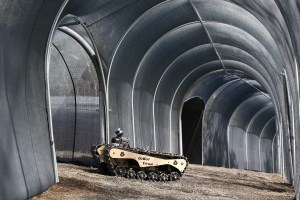 A squad of five autonomous robots and a team of leading researchers from CSIRO’s Data61 is heading to the US next week to compete in the Defense Advanced Research Projects Agency (DARPA) Subterranean Challenge.

The challenge, which will see the robots dive deep into the dark tunnels of a Pittsburgh mine, covers a range of skills including mapping, navigation and remote communication.

The robots must correctly identify and report on the numerous objects and relics hidden within the mine.

Data61 is the only Australian team participating, and the only team from outside the US to receive US$4.5 million in funding across the prestigious three-year challenge.

The robots, most of which are Australian made, will compete in the Tunnel Circuit event to be held from August 15-22 against nine other international teams.

The Tunnel Circuit is the first of three circuits in the challenge.

Surviving teams will compete in an Urban Circuit and Cave Circuit next year.

The final event, planned for 2021, will put teams to the test with courses that incorporate diverse challenges from all three environments. Teams will compete for up to $2 million in prizemoney in the final series.

For the first time, the Australian robots will work as a collective.

They will be building and sharing 3D maps as well as exploring underground environments without human assistance in GPS-denied environments.

In preparation for the DARPA Challenge, the team has been training at a specially constructed 200m tunnel course at Data61’s new Robotics Innovation Centre in Brisbane.

Dr Hudson says the latest challenge will be particularly tough given the dark and dusty conditions of the tunnels and the lack of direct communications (WiFi) to operators above.

“We turn up on the day with our gear and do not know the underground layout,” he says.

The robots have to autonomously navigate the tunnel system before finding and identifying survivors, exit points, and items such as backpacks and walkie-talkies.

Each robot offers its own skill set and works in tandem with the other bots to get the job done.

Dr Hudson says the robust BIA5 Titan OzBot, which is well-suited to rough terrain, will be the primary robot.

“One of the biggest challenges is getting deep into the tunnels with no WiFi,” Dr Hudson explains.

“The robots have to communicate back to the base station from several kilometres underground.

“Our communications solution uses a chain of Wi-Fi nodes that will ultimately be deployed by the Titan to form a main communications trunk for use by our autonomous agents.

“The most difficult part is to get everything working well together.”

One of the main benefits of the DARPA Challenge is the development of new technologies that can eventually be applied to a broad range of real-world applications.

“The challenge has a strong focus on ‘first responder’ applications,” Dr Hudson says.

In the future, teams of robots may be deployed globally in difficult-to-reach areas for infrastructure inspection, search and rescue and disaster relief.

They could also be deployed in remote oil and gas operations, mining and agriculture.

And in countries like Australia they can be used at regional industrial sites that are often located far from major population centres.

Dr Hudson is confident the team will perform well at the Tunnel Circuit challenge.

However, he admits “one little mishap” can sink any of the competitors.

The partnership with robotics and software companies in Australia and New Zealand is one of the team’s key strengths, he says.

Several new capabilities have been added across the range of robots including: Tier 2 E-stops, ROCOS (NZ software) inter-agent communications and new perception algorithms.

“We’re really proud of the core components we’re working on – and we have the capacity and capability to do very well.”