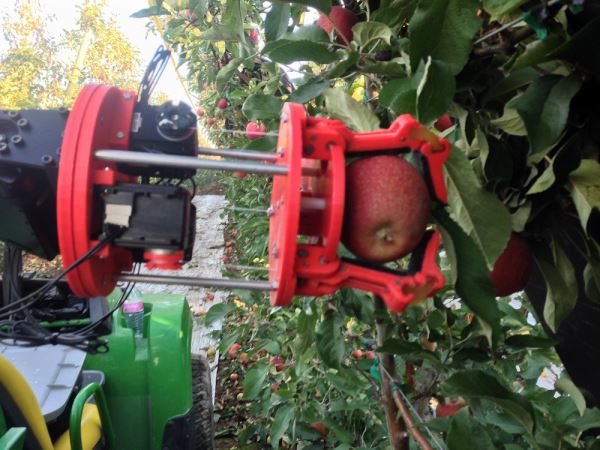 In the UK, the COVID-19 pandemic and Brexit has led farmers to look to robotics and automation technologies to combat chronic labour shortages.

But lockdowns, travel restrictions and Brexit transition has stemmed the flow of migrant workers.

As a result. food suppliers are accelerating their adoption of robots and automation technology to fill the gap.

Globally, agriculture is one of the fastest-growing markets for robotics and automation technology, and is expected to reach a value of US$87.9 billion by 2025. The technology is being explored to increase productivity while lowering costs.

Many farmers are already using tractors, harvesters and other equipment which is self-navigating using GPS.

But other more specialized autonomous systems are being developed, such as fruit-picking robots and those designed for pruning, thinning, mowing, spraying or weed removal.

US robotic company, Abundant, is currently working on a robotic apple-picking machine that is due to go into production on US farms later this year. This follows a successful rollout of the devices in New Zealand earlier this year.

Rather than grab for the ripe fruit, the robot sucks individual fruit from the boughs, after LIDAR and imaging technologies identify ripe candidates.

The Agras T16 comes with powerful hardware including an AI engine and 3D-operation planning.

In the UK, a new consortium backed by food suppliers is being launched to trial robotics on farms this season.

The consortium, which has the backing of more than 100 of the UK’s fresh food producers,aims to develop and manufacture the technology required to roll out next year.

The UK government is hoping businesses will invest in automation technologies to address the current dearth of “low-skilled” migrants following Brexit and the COVID-19 pandemic.

Among G10 nations, Britain currently has the lowest density of robots in manufacturing.

Germany was ranked third with 322 robots, Japan was fourth with 308, and Sweden was fifth with 240. The United States was ranked seventh with 200 industrial robots per 10,000 workers.