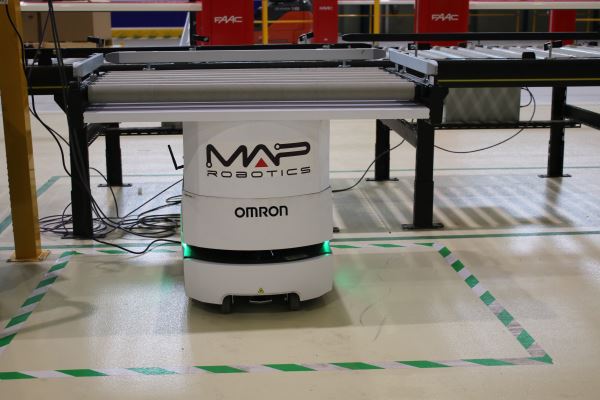 Toyota is set to unveil the most advanced automotive distribution centre in Australia as it transitions from carmaker to vehicle and parts distributer.

The 44,000 sqm two-level Toyota Parts Centre, which is scheduled to open later this year, will carry more than 100,000 automotive parts for local and export markets.

Toyota has partnered with Omron, a global leader in automation, to develop an innovative warehouse solution using the latest automation technology.

For the first time, Toyota will use a fleet of five Omron LD 90 mobile robots (Autonomous Intelligent Vehicles AIVs) to move parts around the new facility.

Under the new system, up to 100 mobile robots can be deployed using a single enterprise manager Fleet controller.

According to Omron, mobile robots provide more flexibility than AGVs.

They are nimble and offer greater speed and dexterity to improve throughput – and they can safely operate alongside people and avoid obstacles.

Also, AGVs can be costly and time-consuming to install and only follow pre-programmed paths. They’re also inflexible – they can’t drive around obstacles and obstructions.

AIVs have the intelligence to choose the best path for each individual job.

And Omron’s LD Series mobile robots can operate up to 15 hours on a single charge.

At the new Toyota facility, the robots will carry payloads of up to 50kg and will travel at speeds of 3.8km/h or 1m per second.

They can be programmed to play music or broadcast spoken safety warnings such as “moving forward, reversing and stand clear.”

The robots are fitted with fully integrated roll-tops so that plastic crates with parts can be seamlessly picked up and transferred onto fixed conveyors.

Omron-Adept AIVs were chosen for the project based on a proven track record spanning nearly 17 years.

Toyota believes they are the perfect design for this type of application. They’re also extremely reliable and easy to install.

Omron says it’s the only company that provides a total robotics/automation integrated solution for projects of this kind.

Most advanced of its kind

The automation package for the Toyota facility has been nearly two years in the making.

And Omron believes the system is the most advanced of its kind in the world.

Using the latest technology available it will be the most efficient automated facility in Australia for parts warehouse picking.

The new technology has been trialled for the past 12 months from proof of concept to ensure the functionality is met.

After two more trials the new technology will be officially launched – subject to passing the necessary criteria.

The new system can be accessed from anywhere in the world via tablet or PC.

Fastest and most reliable network

In May 2016, Toyota Motor Corporation selected EtherCAT as its industrial Ethernet technology of choice and its new factories around the world are based on EtherCAT – recognised as the fastest and most reliable network for plant automation.

Job information issued from MES/ERP/WMS (Manufacturing Execution Systems/Enterprise Resource Planning, Warehouse Management System) is propagated automatically to the fleet in real time. The ‘Enterprise Manager’ selects the most suitable robot from the fleet.

Every robot’s status information is communicated between the Fleet and the IT Systems MES/ERP/WMS.

The Enterprise Manager also enables mobile robot jobs to be reprioritised on the fly, ensuring throughput is optimised.

The actual payload type on each LD mobile robot – this data is now real-time traceable up to MES/ERP/WMS IT systems. Job payload data (eg SKUs) travels with the mobile robot.

Single robot operation is fairly simple – there are no other robots that could get in the way.

But controlling a fleet of mobile robots and managing the 100s of tasks among a fleet is a complex task.

This essential function is where other mobile robot technologies struggle, Omron says.

Omron’s Enterprise Manager is an intelligent Mobile Robot Fleet management system. It automatically handles all coordination and decision making to ensure the fleet is operating at peak efficiency.

It monitors each robot’s status and adapts to facility changes. It reduces wasted time and movement by continuously looking ahead to anticipate which robots will be best positioned for upcoming tasks.

Not just a transport system

It is also a traffic cop. The Enterprise Manager notifies converging robots of their predicted paths, allowing them to re-calculate to avoid collision and congestion in the most efficient way.

Omron mobile robots are not just a transport system. They also integrate with Omron’s Smart Factory.

They control the movement of fixed conveyors on the plant floor, notifying conveyors when a mobile robot has arrived ready to automatically pickup or drop off payloads.

Omron’s PLC Controller like the NX102 have a built-in SQL database and OPC UA to enable machine floor data to be shared with IT systems, IoT and cloud.

During the past year Omron has provided extensive consultation and training for Toyota staff and the system integrator.

Toyota has long been recognised as an industry leader in manufacturing and production.

The company has had a presence in Australia since 1963 – with Australia one of the first countries to assemble Toyotas outside Japan.

It was the last of Australia's major automakers to cease manufacturing in Australia, following similar moves by Mitsubishi, Ford and General Motors Holden.

Operations at Toyota’s national parts Eastern Regional Office at Caringbah in southern Sydney will be transferred to the new facility in coming months.

When completed, the showcase Kemps Creek facility is expected to provide employment for up to 140 people over two shifts.