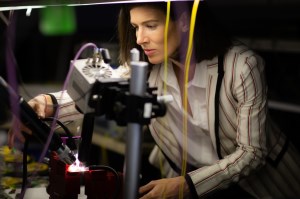 A physicist at the University of Sydney Nano Institute has made a major breakthrough in the quest to develop the world’s first quantum computer.

In a world-first demonstration of topologically protected biphoton states, physicist Dr Andrea Blanco-Redondo has opened up a pathway to use light to develop a new type of qubit, the building blocks for quantum computers.

Scientists in Australia have for the first time demonstrated the protection of correlated states between paired photons – packets of light energy – using the intriguing physical concept of topology. This experimental breakthrough opens a pathway to build a new type of quantum bit, the building blocks for quantum computers.

The research, developed in close collaboration with Israeli colleagues at Technion, is published today in the prestigious journal, Science, a recognition of the foundational importance of this work.

Logic gates are the switches needed to operate algorithms written for quantum computers. Classical computational switches are in simple binary forms of zero or one. Quantum switches exist in a state of ‘superposition’ that combine zero and one.

One of the biggest challenges in modern physics

Protecting quantum information long enough so that quantum machines can perform useful calculations is one of the biggest challenges in modern physics. Useful quantum computers will require millions or billions of qubits to process information. So far, the best experimental devices have about 20 qubits.

To unleash the potential of quantum technology, scientists need to find a way to protect the entangled superposition of quantum bits – or qubits – at the nanoscale. Attempts to achieve this using superconductors and trapped ions have shown promise, but they are highly susceptible to electromagnetic interference, making them devilishly difficult to scale up into useful machines.

The use of photons – packets of light energy – rather than electrons has been one proposed alternative upon which to build logic gates that can calculate quantum algorithms.

Photons, unlike electrons, are well isolated from the thermal and electromagnetic environment. However, scaling quantum devices based on photonic qubits has been limited due to scattering loss and other errors; until now.

“What we have done is develop a novel lattice structure of silicon nanowires, creating a particular symmetry that provides unusual robustness to the photons’ correlation. The symmetry both helps create and guide these correlated states, known as ‘edge modes’,” said Dr Blanco-Redondo, the Messel Research Fellow in the School of Physics.

“This robustness stems from the underlying topology, a global property of the lattice that remains unchanged against disorder.”

The correlation this produces is needed to build entangled states for quantum gates.

Channels, or waveguides, made using silicon nanowires just 500 nanometres wide, were lined up in pairs with a deliberate defect in symmetry through the middle, creating two lattice structures with different topologies and an intervening “edge.”

This topology allows for the creation of special modes in which the photons can pair up – called “edge modes”.  These modes allow information carried by the paired photons to be transported in a robust fashion that otherwise would have been scattered and lost across a uniform lattice.

The photons were created by high-intensity, ultra-short laser pulses, the same underlying technology for which Donna Strickland and Gerard Mourou were awarded the 2018 Nobel Prize in Physics.

This research is the latest in the flourishing of discoveries in the past decade on topological states of matter. These topological features offer protection for classical and quantum information in fields as diverse as electromagnetism, condensed matter, acoustics and cold atoms.

Microsoft Quantum Laboratories, including the one in Sydney, are pursuing the development of electron-based qubits where quantum information is topologically protected via the knotting of quasiparticles known as Majorana fermions. This is a bit like braiding half electron states induced through the interaction of superconductors and semiconducting metals.

Topologically protected states have previously been demonstrated for single photons.

However, Dr Blanco-Redondo said: “Quantum information systems will rely on multiphoton states, highlighting the importance of this discovery for further development.”

She said the next step will be to improve protection of the photon entanglement to create robust, scalable quantum logic gates.

Professor Stephen Bartlett, a theoretical quantum physicist at Sydney Nano who is unconnected to the study, said: “Dr Blanco-Redondo’s result is exciting at a fundamental level because it shows the existence of protected modes attached to the boundary of a topologically ordered material.

“What it means for quantum computing is unclear as it is still early days. But the hope is that the protection offered by these edge modes could be used to protect photons from the types of noise that are problematic for quantum applications.”

The paper was co-written with Dr Bryn Bell; the Director of Sydney Nano, Professor Ben Eggleton; and Dr Dikla Oren and Professor Mordechai Segev at Technion in Haifa, Israel.

This work was supported by the University of Sydney and the Technion collaborative photonics research project funded by the Technion Society of Australia (NSW) and the NSW Department of Industry.